We are a coalition of organizations and people working to end the climate crisis, with action in our community and throughout the world.  We believe that every community must take immediate actions to rapidly phase out fossil fuels, and to protect their most vulnerable people from the ravages of climate change.

We were founded in 2014 after the City of Ann Arbor adopted one of the country’s first municipal climate action plans, a bold framework to reduce the community’s climate emissions 90% by 2050.  Since then, the City has expanded its transit service by 43%; committed itself to operating all of its facilities on 100% renewable energy by 2030; and created an 8-year $880,000/year fund to begin implementing the climate plan.

On September 20, 2019, 7,500 people went on strike in Ann Arbor -- from their classes and jobs -- to rally for climate action. We were part of the Global Climate Strike that day and the following Friday, where 7.6 million people walked out to demand an end to the climate crisis.  The power of our movement is growing, and we invite you to get involved. Join the Ann Arbor Climate Partnership today.

The IPCC Agrees:
When the federal government is run by climate science deniers, it's up to the cities and states to lead. 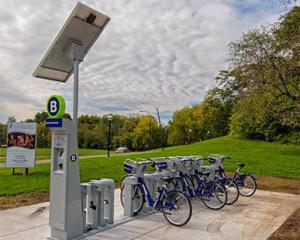 Ann Arbor has a bike share program called Arbor Bike intended for short trips around town. Anyone over the age of 18 with a valid credit or debit card can purchase a single day, one-month or one-year membership. Click to see a map of current and planned bike share stations near you. Photo: Doug Coombe.
More info about Arbor Bike ↝ 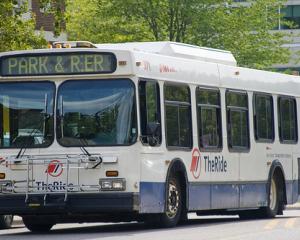 In May 2016, The Ride introduced the biggest expansion of bus service in the greater Ann Arbor and Ypsilanti area since 1979. Need to find upcoming bus arrivals at a specific stop? Click to see Live Maps.
More info about The Ride ↝ 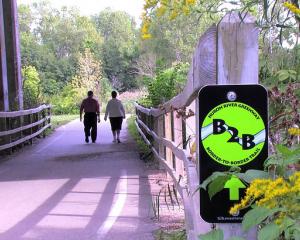 The Border-to-Border (B2B) Trail is an ongoing collaboration of communities and organizations to construct a shared-use path that will link the open spaces of the Huron River Greenway. Over 24 miles of paved, shared-use paths exist as a part of the B2B today, with even more to come! Click to see a map of the B2B Trail. Photo: WBWC.
More info about Border to Border Trail ↝

The "average person" in 16 of 20 large US cities would save over $10,000 a year by using public transit instead of driving.

Ann Arbor's commercial and industrial sector made up approximately 25% of its GHG emissions in 2010.

Ann Arbor's residents through heating and cooling of homes created approximately 22% of the area's greenhouse gas emissions in 2010.

Ann Arbor's Climate Action Plan sets the goal of a 25% reduction in carbon dioxide emissions by 2025.

Ann Arbor's Climate Action Plan sets the goal of a 90% reduction in carbon dioxide emissions by 2050.

Let's get to work on climate action in A2.

Thanks to you, Washtenaw County is moving forward on community and climate. Learn More
read more

Pledge to #ActOnClimate. Join the Ann Arbor Climate Partnership and get updates on how to get involved with local climate action.
ActOnClimate